From EHWiki
(Redirected from Weapon)
Jump to navigationJump to search

Equipment is worn to enhance a player's stats. It is equipped via the character equipment screen. 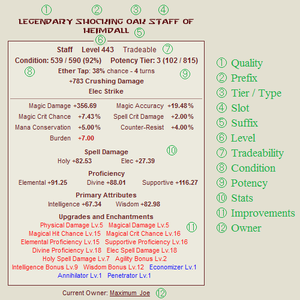 The layout of an equipment piece's popup

To open a popup window listing the stats for a piece of equipment, simply mouse over the equipment (in either the Equipment Shop or the character equipment screen) and press "C". Caps Lock must be off and the browser used must be set to allow popups from the HentaiVerse. This allows the stats or the equipment URL to be copied and pasted such as in a forum post.

Hovering over equipment stats on the equipment popup and in the forge and lottery will display the base (level 0) value for the stat.

The base chance for equipment to drop is 4% of a normal loot drop (See Loot Drop Rolls). This can be increased (up to doubled) via Quartermaster training. Quartermaster only increases the ratio of Equipment in relation to other drops. Drops are nullified if a player is holding 1,000 or more pieces of equipment.

Note: Equipment from older versions of the game may be found in the Bazaar's Equipment Shop but no longer drop from battles.

Most equipment possess levels, similar to players, which affects their stats.

Note: The information in these tables does NOT include bonuses from prefixes or suffixes.

One-handed weapons can be used for 1H and DW styles (eventually also Niten, in case of Wakis). They typically have lower damage, higher accuracy, lower critical, weaker procs, and lower burden/interference than two-handed weapons. They also usually have a parry bonus and can have the "of the nimble" suffix.

Two-handed weapons can be used for 2H style (or eventually Niten, in case of Katanas). They typically have higher damage, lower accuracy, higher critical, stronger procs, and higher burden/interference than one-handed weapons. They also don't have any parry bonuses.

Armor can be divided into shields, cloth armors, light armors, and heavy armors. Each category of armor has 3-4 types available in the game. Each type of armors has particular strengths and weaknesses and suit the needs of different character builds and play styles. Each category of armors (besides shields) have abilities that can raise different stats as proficiency increases if the player is wearing the full set of armor.

Currently, each category of armors have 1 type that no longer drops in-game and can only be purchased from the bazaar or from other players.

Shields are used in One-Handed fighting style. They have very low mitigation stats, but are notable for their ability to block both physical and magical attacks and gives a player a chance to Counter-Attack after a successful block.

Armor tier drops are affected by difficulty setting and determines the equipments' rarity and bazaar value. There is one 'common' tier and one 'rare' tier.

Prefixes and Suffixes are special characteristics that can be found on all weapons and armor and add or improve certain stats.

There are separate rolls for the various primary attribute bonuses that can be applied to an equipment piece. Since it rolls against a probability for each given stat, a given piece will usually not have every bonus it can have.

The following table is the list of Primary Attribute Bonus possible on the specific type of equipment.

A: Can come with Int and Wis bonus if it has the "of the Arcanist" suffix.

Can be obtained on weapons though Equipment Prefixes, achieving level 10 potency in Item World, or by infusions through The Forge.