From EHWiki
(Redirected from renaming)
Jump to navigationJump to search 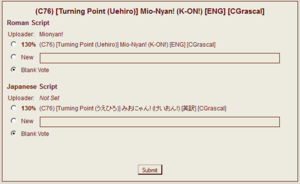 Renaming allows users besides the gallery's uploader to change the name of a gallery. Typically this makes the gallery easier to identify or find via searches.

The basic styles are as follows:

Anatomy of A Gallery Name

Convention Name
The convention where the work was sold. Shorthands are used (see below). Never applies to [Digital] releases.
Doujinshi released for conventions for which the event has been canceled should not have a convention name.
Confirmed canceled conventions: Comic Market 98 (C98, 2020-05-02 to 2020-05-05), Reitaisai 17 (2020/05/17), COMIC1*18 (2021-02-07).
Circle Name(s)
The group name(s) under which the artist(s) work. Should only used on works where the circle is explicitly credited.
Artist Name(s)
Writer names are also accepted for novel-type works but they are never to be tagged.
Title(s)
Translated works may include the translated title after a vertical bar (e.g. Nurse wo Kanojo ni Suru Houhou | How to Go Steady with a Nurse). Sub-titles should be separated with a hyphen.
Chapter / Volume
Always abbreviated. Includes a space in the R field (e.g. Vol. 8 / 第8巻). Chapters use ranges as needed (e.g. Ch. 1-5 / 第1-5話).
Magazine or Tankoubon Source
The publication source of the scan. For magazines use title and date only. Magazine title with both English and Japanese (e.g. COMIC 真激) use a space between the English and Japanese portions. Tankoubon sub-titles are not needed.
Parody Name(s)
Titles of the series being parodied. R field should generally match the series' tag while the J field generally uses the non-romanized title.
Language
The language's name in English (e.g. [German], not [Deutsche]). Thai and Vietnamese include their in-language equivalents.
Translator(s)
Only for the R field. Square brackets are preferred but others are also acceptable depending on the translator's own formatting choice.
Special Indicator(s)
Decensored, Colorized, Incomplete, Digital, Sample, Textless, etc.

For stand-alone multi-artist publishings only (serialized publishings do not apply). This indicator is placed before the title:

For a comprehensive list of languages and their indicators, see here.

Renaming galleries (as well as expunging them) rewards points for the Cleanup Toplist. Users receive 5 points for being the first to petition and 1 point for voting on an existing petition. If a rename only differs from the current name with whitespace characters it will only reward 1 point. Points are only awarded on the day that the petition is successful and will not be rewarded if the petition does not pass.

Repeated poor use of rename petitions may result in the user being banned from renaming.

https://www.comic1.jp/CM*_circle_list.htm - Replace * with the convention installment, starting with 5 for COMIC1☆5