From EHWiki
Jump to: navigation, search 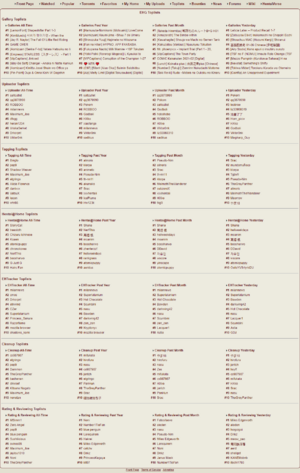 The E-Hentai Toplists are a public measurement of a user's participation in E-Hentai Galleries' various systems.

Toplist ranks are not meant to be pursued for selfish purposes nor through system abuse. Users who treat them as such will be permanently banned.

All 7 categories are further separated into Day, Month, Year, and All Time sub-categories (28 total).

Lists the most viewed galleries. To be featured on this list users simply need to upload galleries and for many users to view them. Users receive points for each viewed picture up to a maximum per gallery and also for each Archive download requested on their gallery. A "visit" is counted once per visitor per half hour per gallery.

Users can view what kind of activity their own galleries are receiving by going to their Gallery Manager. For other galleries users may visit them and click the "Gallery Stats" link on the right.

If the images in a gallery are fully contained in another gallery from which it is not a direct descendant it is excluded from the toplists.(Ref)

Similar to the gallery toplist, this list is for the cumulative total activity of all of a user's galleries. This list is much more competitive since users need to upload many galleries that continually receive visits. Users can see what kind of activity their galleries are cumulatively receiving on their My Stats page.

Lists the top taggers. To tag users simply need to go to any gallery and put in descriptors that describe a noticeable portion of the gallery's content, characters, etc.

The most common ban is due to poor tagging. It is highly recommended to read the tagging guidelines and approved tags list before tagging. When in doubt it is simply better to not tag something.

Lists the top users running Hentai@Home clients. Points are based on the hits received for all of user's H@H clients and Adopt-A-Server activity.

Lists the top uploaders for torrents on the site's tracker. The score is a weighted combination of a user's torrent completions, seedmins, and seed ratio for the given period. Seed ratio is capped to a factor between 0.1 and 2 and seeding is capped at 17,280 points per day.

Lists users who most contribute to the ongoing effort to keep the galleries properly organized by updating titles as well as expunging unsuitable galleries. Incomplete petitions do not reward points. Usage of the The Vigilante subforum is extremely recommended.

If you create or vote for an invalid (appealed) expunge but are also the one who created the appeal, it will zero out and give 0 points total.

Voting against petitions or appeals does not grant toplist points.

Lists the top users who have either rated galleries, made comments on galleries, or voted on such comments. There is a cap of 20 points per day for rating and 50 points per comment (depending on which users voted for it and what other comments those users voted on). There is a limit of 10 comment votes per day that award points. Comments must be longer than 100 characters in order to qualify for points.

Users whose galleries rank in the top 25 for the day are rewarded passively during the period of time in which their galleries hold those ranks. The increased HentaiVerse experience gain lasts between toplist calculations (~24 hours).

These and are distributed on the first day of each month to the users who ranked in the top of the monthly toplists on the previous day. Users that rank in multiple toplists get one coupon per each ranking. These function as trophies and can be exchanged at the Shrine for equipment.

These are strictly meant as compensation for those who greatly contribute to the site for the duration of a month; they are NOT incentives for those purely seeking HentaiVerse loot.

These are given on special events, primarily to users who have contributed greatly to the community.

Most of these are strictly meant as compensation for those who greatly contribute to the site for the duration of a year; they are NOT incentives for those purely seeking HentaiVerse or other rewards.

Ranking Points for awards made after 2010 are based on the sum total of yearly toplist placements for each category.

In addition, ranking points could be boosted via MVP Nominations(ref), starting in 2019.